With the discovery of Gold at Spring Creek below the gorge in February 1852, Beechworth (then surveyed as Mayday Hills) was subjected to a massive influx of gold seekers eager to make their fortune at this very rich goldfield. Within eleven months of this discovery, over 8000 diggers, many from overseas, had descended on the new find.

Life and conditions on the diggings was primitive to say the least. The lack of basic conveniences and sanitation led to an outbreak of typhoid. Among the early deaths was the first Doctor to arrive in Beechworth, Dr Henry Green who died four months after his arrival, a victim of typhoid fever. Between 1853 and 1860, an average of one child per week died of disease including measles, scarlet fever, dysentery, diphtheria, and typhoid.

The first burial site was in lower Stanley Road. The First official cemetery was in Loch Street from 1853 to 1855. Many of the bodies were later exhumed and reburied in the “Pioneer Section” of the present cemetery which opened in 1856. (More detail of the reburials can be found within the Tours of Historical Graves at Beechworth Cemetery). Of particular historical significance is the Chinese Section of the cemetery.

Here some 2000 Chinese gold seekers and settlers are buried. The Chinese Burning Towers (1857) were used for burning paper prayers and meals were provided on the altar (1883) for the spirits of the dead. A memorial in recognition and remembrance of the Chinese contribution to society in Australia was erected in the Chinese Section by the Non Pon Soon Society, Non Pon Soon Club and The Victorian Chinese Memorial Foundation Inc. in 2012.

The ornate iron gates and Beechworth granite entrance pillars were erected in 1888. The lawn section of the cemetery, opposite the main cemetery in Balaclava Road was opened in April 1999.

The cemetery which has operated since 1856, has recently received registration with the Heritage Council – Victoria for its significance as a Goldfields Cemetery. It is an important collection of old plants, a burial site for 2000 Chinese and settlers, and rare Chinese Burning Towers and Altar. The cemetery won the Indigo Shire Heritage Award in 2012 for its ongoing management of the cemetery.

The Beechworth Public Cemetery was established in 1856 and contains the graves of many of Beechworth’s pioneers. Several of these graves can be visited by following a marked route around the Cemetery commencing at the main gates.

A brochure outlining the route and the significance of the historic graves can be found at the front entrance. Simply follow the arrows which will lead you to each historic grave.

Their details and gravesites can be discovered by following the QR code directions on signage at the cemetery. 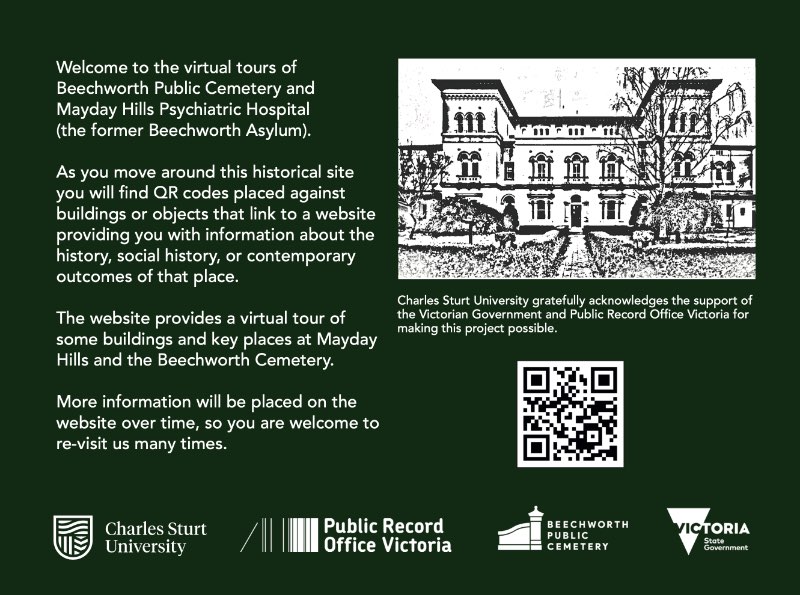 Tour Historic Graves at Beechworth Public Cemetery a brochure detailing their location and history is available inside the entrance gates.